Playing old rivals Clifton Hill is always a challenge, especially with 6 changes from the week before.  Panthers lost the toss and were asked to bowl in steamy conditions.

Stiffler got the new pill and Clifton Hill were one down with a sensational run out from Grady/Wise/Gove in the first over.  Stiffler then got 2 of his 3 wickets shortly after being on a hat-trick and was up and about.  Haydn was hulking it up at the other end keeping things tight.  It was good to see a return of Josh Wise the the club  and has gained not only some new bling but a few km of pace making Govey ask for some ice for his hands.  Grades supported down the other end with raw pace as well bowling out their number 5 with a shin crushing full toss.  On top with the ball we gave a bowl to our pie chuckers (Lozza and Seed) who kept the game interesting.  Stiffler, Josh and Hulk closed out the innings and an honourable mention to Old Man Blacky.  In our best fielding performance in years 160 was set for us to win.

Lozza and Seed opened getting us off to a positive start, rain clouds started to loom and was clear we needed to get scoring up. We lost seed for 10 and the skipper lost his off stump also for 10.  It then became the Lozza show who creamed everything for 4 or 6 powering towards a ton.  Enter Govey who decided to get in on the action with 36*.  Lozza requiring 8 of the last 9 runs unfortunately fell short.  We ended up winning with plenty of overs left and kept the streak going.

With a lot changes again this week, the Twos managed to only get 9 out on the park this week in the bottom of the table clash against Melbourne Deaf.  Before the game, I was asked by their Captain that one of their players who had forgotten his whites, could play in his civvies.  This would have meant they only have 6 players for the match and would have to forfeit.  Of course knowing the hardships of forfeits for a club, being LOC6 park cricket, I was not prepared to be a shit bloke, representing our great club and so I allowed him to play.  They won the toss and elected to bat.  We began the game with only 8 as Garry was on his way from work.

I opened with Nav and Junior Miles.  Nav’s radar was not on, especially with a little humidity and breeze and the ball was going everywhere!  Junior got touched up a little, but truth be told he didn’t bowl too poorly, it was that I originally was thinking in these situations to leave the textbook closed; I was thinking of opening with spin.  Hence, even though we got their key batsmen out, caught Martie, bowled Nav (1 for 35); I went with the change and brought on T. Miles.  Junior did have an eventful over with almost a run out and a caught behind off the bat, then helmet and 12 off it too.  Tony bowled very tightly, and in his 3rd over claimed the wicket of the other opening bat, 2 for 54, stumped Billings Crewes!  Finished off Nav’s spell who found his radar, claiming his second wicket caught behind off his first ball, they were 3 for 54.  The return of Wolfy.  Just as ferocious as ever.  Even their umpire had to question what he was saying, but then also pointing out that they could not hear what he was saying anyway!  New bowling style plus Wolfy is an equation for unpredictable.  Anyway, time to finish it up so I brought on Martie, 2 overs, 2 for 10, done.  They set us 95 for the win.

I asked Garry and Nav to open our account, they did and it went like this: whack, whack, whack, whack, whack, single, whack, Nav out.  1 for 39 off 4 overs.  Tony didn’t trouble the scorers too much, 2 for 42.  Colin batted at 4 and was out there while Gaz continued to go whack, whack, whack, retired not out for 51.  I sent Chin out, a good experience for the two to chase down the last 30 odd runs required.  They did a good job, nothing too silly and brought us home in 14.5 overs, to win by 8 wickets.  A great win by the lads, yes they may have had 7 and we the 9, but you still got to do the job and work hard, which is what they boys did yesterday.  This win now moves us up the ladder and in contention for the four – forfeit losses don’t help our cause.  If we get a Second XI up each week, I feel we will be a lot more competitive.

Unfortunately for the third time we have been unable to fill a Vets team.  This means that we have no option but to withdraw the side from competition. 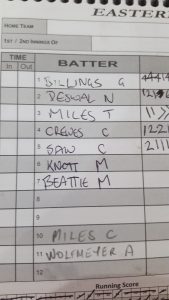 I honestly could not decide who would bat at 11!