The Ones took on old enemy St Barnabas at Myrtle Park; a ground that holds many sufferings for the club over the years, but some great wins too.  Club Captain Will McKenzie was back this week and continued his run of toss losses, and we were sent into bat.  Understandably, they sent us in with their opening combination dominating the first few games.  Grades and Knotty strode out to the middle to take on the best opening combination since Ambrose and Walsh.  Grades played a cracking shot for 4, but then was caught driving the next ball, 1 for 4.  Knotty and Worms batted together for a while, working hard in tough conditions before Knotty was caught at first slip, 2 for 20 odd; partnerships not entered in MyCricket.  This was the beginning of a collapse, Worms, Dools and Brenton’s all out, 5 for 29.  Greeny and Captain McKenzie came together, saw off the last couple of balls from the openers and cashed in, scoring a lot of runs.  Bisty was energetic and made sure that mid-wicket earnt his catch, 7 for something.  Enter Gaz Billings, the run machine.  He (45*) and Greeny put on heaps of runs for the 8th wicket before Greeny (63) held out second last ball.  No need to mention Stiffler’s appearance. 8 for 201cc.

Greeny and Bisty opened the attack, bowling tight consistent lines.  Finally the break through that Bisty had predicted (he informed the batsmen before he had faced a ball that he would take his wicket), breaking through the defence and bowling him, 1 for 0.  As creative as their batsmen were trying to be, they just could not get through the field.  Change, Grades and Stiffler on.  Grades was moving the ball both ways, this week he was dominantly inswing and was very tight again.  With his first ball of the season, Stiffler found the edge of the other opening batsmen, comfortably caught by Knotty.  Then a barrage of full balls from Stiffler continued and tight line and length for Grades, but it was Stiffler’s day, getting his first Michelle, 5 for 24 .  Grades and Gaz were involved in an interesting run out where the batsmen popped it up above himself, lost it, it hit him one third up the pitch.  This is where the luck came in, went straight to Grades who was able “soccer” it to Gaz who was quick to whip the bails off and send the stumps cartwheeling. Another great win for the Ones, still have to keep working, getting players down and build on a very good start.

As much as the result is disappointing, the fact that I can report on the Second XI feels fantastic.  To the efforts of a lot of people, but Tony Miles and Chinny in particular, we managed to get a Second XI out on the park at home.

Although Captain Speed won the toss, he elected to bat thinking it’d be easier to score, padded up and umpire (as we only had four there at the time), than field with four in total.  Speedy opened with himself and club legend Pete Lithgow, returning to help us out.  Now I wasn’t there, but going through the scorebook, it looks like they got off to a reasonable start, but Speedy falling in the third over, 1 for 12.  Enter D. Gove.  Govey and Lithgow looked to have fun as well before Pete was caught, 2 for 30 in the fifth.  Then a massive run partnership between Govey (50rtno) and Sai (49) – wasn’t marked where Govey retired.  Young Aaron Gove played his first of hopefully many Senior games for the club, making 4 but he batted well.  Jim Forsyth and Rod “Rocket” Campbell finished off our 35 overs, 7 for 185cc.

Speedy opened with Nav (welcome back) and Cheesey (also welcome back), both bowled really well.  Nav taking 2 wickets (2 for 25) from his end and Cheesey (0 for 35) holding up his end.  As Speedy was Captain, he decided to give himself his full allotment of overs, taking 2 for 50, including a run out and two catches.  Cameron Dickson had something to show for his $10 and was given the pill in over 9.  Winding back the clock, he bowled well during his 5 overs, 1 for 23 with new player to the club, Kyle Sarne, straight from the backyard, taking the catch.  As mentioned earlier, Aaron Gove playing his first Senior game got a trundle; I’m sure there were nerves, but he shook them off and bowled extremely well.  Unfortunately we lost, but were very competitive.  A massive thank you to:  Rocket, Pete Lithgow, Jim Forsyth, Cheesey, Dicko (welcome back all), and first gamers Kyle & Aaron, welcome to our magnificent club.

Unfortunately, we could only manage 5 players for the Vets this week.

Go to MyCricket for all details.

Next week there are no games for Melbourne Cup long weekend.  There will be no training this Thursday, 2nd November.

It was a great effort this week to get two senior teams up, but we’re not out of the woods yet.  Next game we will be faced with filling three sides again.  If you wish to play, even if it is every second week when it ties in with vets then please let us know, as that would be appreciated.  The fixture can be found by clicking here. 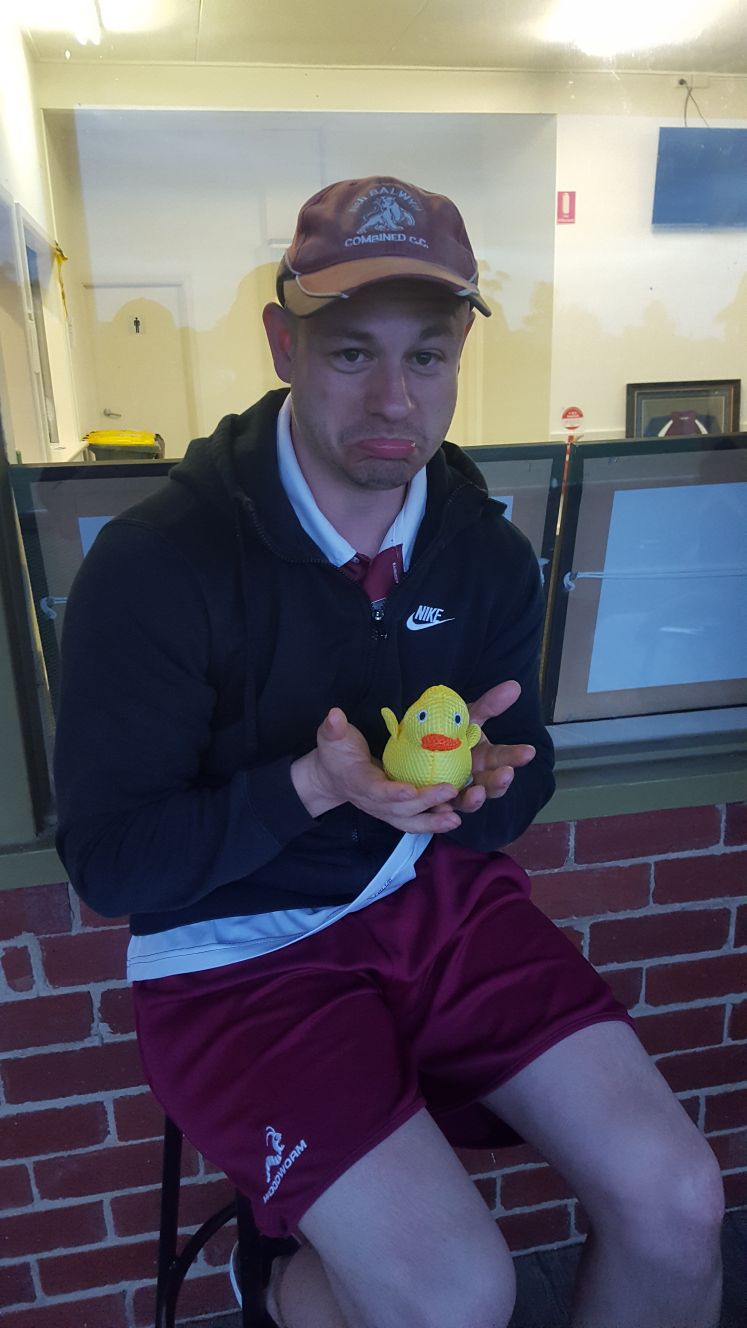 Mixed emotions for Dools, beating his old club but making a duck!