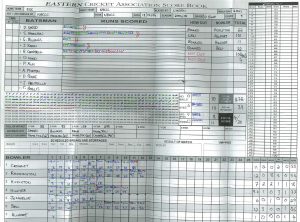 Twas the middle of summer 2004 and a young Steve Hamilton (still had the body of a 50year old) at the crease,  he had never made a ton at the club. Hammo was out there through blood, sweat and tears (true this was characteristic of all Hammo’s innings) but he was 285 runs before he got to hold up his bat for his break through ton and was soon dismissed.

It was Steve Hamilton’s day.

That was until Rod Campbell strolled out to the crease and proceeded to smack BUC around for a 47 ball ton (last 50 coming from 18 balls). A few weeks ago I mentioned about Kegs sportsmanship when he opted to block out his an over not to break a poor kids spirits.

Rocket exhibited none of this kindness but was rewarded with the fastest known Panther ton.

If you’ve found a quicker ton or a TBT game to look at please send through to secretary@thepanthers.com.au or leave a comment.