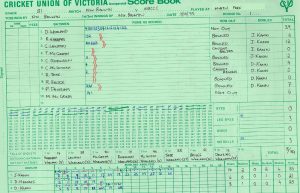 The Bulls won the toss and sent the Panthers in, we lost Doherty in the first over and plotted our way to 1/38 from the first 10 before the heavens opened and the players went  off.

Sun emerged and play could go on, as this game pre-dated the Duckworth Lewis Method the WG Grace Calculation meant the game was reduced to 28 overs each.

Pre-rain Govey looked good making 20 post rain he walked back to the pavilion failing to add any further score.

Out walked “one of the Kann brothers” the eldest Simon to join Rob James and the two compiled a great partnership with Skanny upping the run rate and Rob continually turning over the strike. Rob James made 36 with the partnership contributing 76

Based on photos from that era Simon wasn’t too keen on running and his innings resembled that with 7 boundaries and 2 majors finally getting bowled for 71.

Not much else to report from the batting with the exception of a cameo knock from Damien Kann with a quick fire 12*
Panthers set 180 to win.

We opened up with Julian Kann, who’s bowling can be best described as left arm crazy.  Jules managed to bowl 14 of the 28 overs (clearly a flaw in the WG calculation) destroying the bulls by bowling out 3 of his 4 scalps.

It is fair to say the infamous Baby Hewins laugh was not heard as he got spanked out of the attack and replaced by Damien Kann.

It was a Kann double act and Damo got into the fun with 4 of his own wickets (also 3 bowled) which restricted the Bulls to 84 from their allotted overs.

A fair day out for the Kann’s and the Panthers