Throwback Thursday – A Nailbiter Against the Barnies 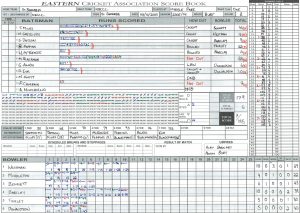 The batting – click the link to view the full sized scorecard 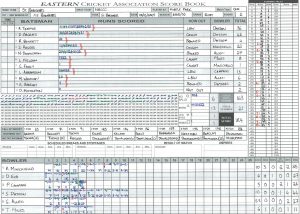 The bowling – click the link to view the full sized scorecard

Fresh off a disappointing season in 2004/05 which saw us relegated to Burt Shield the Panthers were keen to get back where we belonged.

Round 2 saw us come up against old foe St. Barnabas at Myrtle Park.

Losing the toss and getting sent in did not worry the openers with Tony Miles and Michael “The Future” Spetsiotis getting us off to a great start.

Poppo and Datto both got starts but failed to capitalize, Wilbur lost his off peg for a blob, and Nudge was triggered.

Despite his slow start ( 1 from 12 balls) Matthew Blackman turned in one of the great cameos smacking the Barnies around and making 67 runs from his next 44 balls -including  20 from the last 4 balls of the innings!

Special mention to PC who hit his first ball for 6!

Seemingly, the total did not intimidate the Barnies, with Argenti (Bakes’ biggest fan) getting the Barnies off to a great start and positioning them for an easy chase. They were cruising at 3 for 125, requiring 60 from 84. Datto was thrown the ball and went on a rampage and taking 3 wickets in the next 4 overs with Tony holding up an end the game was back on.

But the Barnies got back into cruise mode and looked set to win, requiring 16 from 4 overs

Enter Nudge who, despite getting spanked earlier, got thrown the ball and 3 tight overs and a couple of wickets ensured the game would go the distance.

The Panthers needed 1 wicket, the Barnies needed 2 runs from 2 balls. A set batsman was on strike.

The Iceman did the Panthers proud bowling Donaldson just short of the total.

Later it was realised this was the GF preview which the Panthers also won returning us back to Macgibbon Shield.

Know of a classic Panther game that should be reviewed? Let us know in the comments!

We are training this Sunday at 11am at Maddocks – details of all our Sunday indoor sessions can be found here. We have also announced teams and captains for the upcoming season.