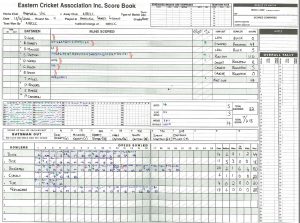 However, back in the olden days (circa 1999-2000 season), “Datto” was a bowler (despite never taking a 5-fer) – the ECA publication Cricket In The Park listing his career average at 9.50 runs is proof of that.

This day the Panthers bowled out Hartwell and had to bat out the evening.

We lost Govey (quack quack) and Minuzzo cheaply and our “Star” batsman – a man who batted at 4 for a decade – John D. Ward was scheduled to walk out.

Now we all know Wardy was a very courageous man on the football field, but his customary courage went missing that afternoon as he requested a nightwatchman.

Datto, originally slated to bat at 10 (below Bakes) jumped at the chance and volunteered.

Sure enough this was his breakthrough innings and first century and for the last 15 years he has been the Panther’s best batsman.

Did you know? Preseason training is happening every Sunday this September.