The Ones played at home against East Malvern Tooronga CC in front of a good crowd, whom were not disappointed with what they saw. Captain Willie lost the toss and was inserted; they must have thought they’d be handy with the ball. He opened with Gazza and with the Greek God of Cricket, Lozza. They got off to an absolute flyer, Gazza scoring 45 and Lozza a handy 77. After his duck last week, Doolz had something to prove. He started off slowly, pushing it around before firing up and smacking them all over the park for 83. Absolutely flying. Worms was batting well until a ball hit the top of his bat and he was off to the hospital to get his chin glued back together. We saw him later, he was fine. Will saw it out to the end with Stiffler, who hit a massive 6 to Stiffler corner off the last ball. 6 for 292cc.

Needless to say that East Malvern Tooronga had their work cut out for them. Made harder when Greeny is steaming in and making the ball sing and dance. He was unlucky. Stiffler though continued to take wickets, adding another 2 to his season’s collection. Loz had a trundle but like his batting, their batsmen enjoyed his bowling. Speedy bowled well, just did his job. The superstar of the day, Doolz managed to snag himself a bowl and get himself 2 wickets. But the highlight was new player, Naveen who we were told bowled like lightning and smashed stumps like thunder (Speedy’s call), ended up being a precise medium pace bowler with a very nice action. Naveen managed to get himself 2 wickets, which included a blinder by Brenton in slip – a blinder as all reports say he didn’t see it and caught it behind him.

Well done Ones for your third win in a row, but still plenty of work to be done.

The Twos, through the perseverance of Tony Miles got 11 players up for their encounter with Burnley CYMS at Fletcher oval, a small ground with a bouncy pitch. Captain Knotty took the reigns this week and lost the toss, we bowled. Opened with Nav and the Hulk, Haydn Blackman who settled in nicely after 4 years with the new pill. Unfortunately wickets weren’t coming his way, but he did bowl extremely well, maybe too well for their batsmen. Never the less, Nav found the formula at the other end. Both openers hit him for 4 but the next ball he took their wickets. One was a sharp catch by Matt Blackman who at second slip stuck both hands like rewarding a field goal and it stuck in his right hand. 2 for 20, change. M. Blackman and T. Miles, a very brave move considering the size of the ground! Tony managed to snag himself 2 wickets whilst Blacky wound back the clock to bamboozle the batsmen, very unlucky. What we did learn is that Martie will catch every third that comes his way, and regardless of the level of toughness. Benny Blackman came on and was smashed first ball… but similar to Nav, took that batsmens wicket 2 balls after it was found in the shrubbery. We finished off with Martie who was good and the little chihuahua, Craig Miles. Junior’s first wicket was caught by his dad, Tony which brought a smile to everyone else’s faces. Junior, pick of the bowlers, a sorbent performance, 4 for 18, bowling them out for 144.

We went into bat knowing that there was a job to do and it wouldn’t be easy. Then it happened, Tony was bowled for 29 with the score now 1 for 76. Needless to say the openers, Tony and Lith (38) did the job. We had a mini collapse with Knotty strode out there and then waddled back 5 balls later. Govey and Martie did the job and finished it off with Govey utilising a 6 to ensure the win. A good win for the twos who’s record now stands at 1 win, 1 loss, 1 forfeit loss and 1 draw.

We were due to play Mazenod OC at home last Sunday but just did not have the numbers.

As nice as it is having a senior club with two sides, which hopefully results in two finals appearances, it’d be even better if we can get a vets team out there every second week too. 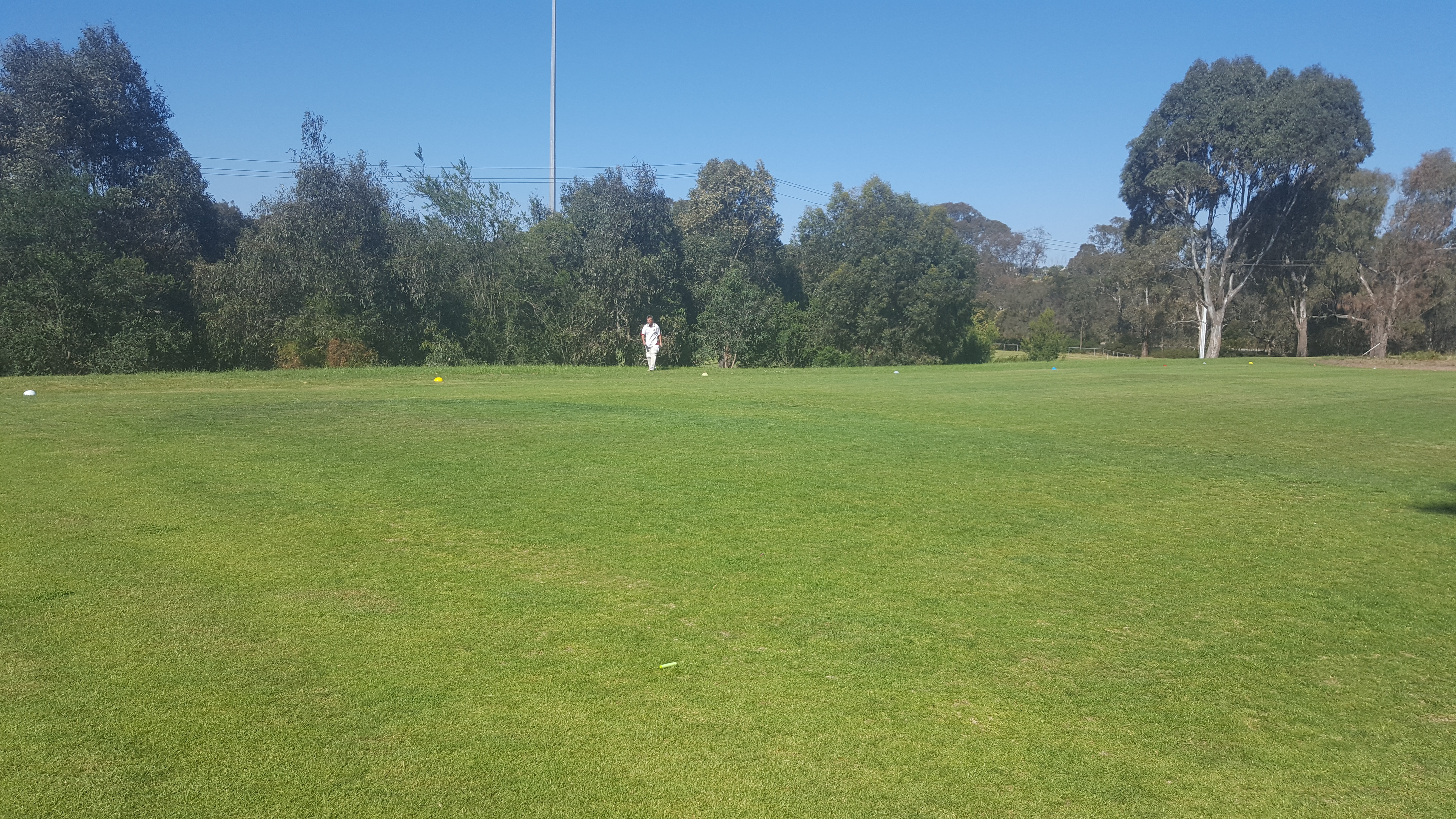 Junior was so nervous, he wandered into the bushes to pose as a gnome.