Round 19 and Woody’s Function Summary

In a game that was going to be a good one to win going into the finals we started with another drizzly day at East Doncaster. Will won the toss and sent them in so we could stay in control if rain developed later.

A much more upbeat side got away to a strong start with tight bowling seeing them stuck at 1/46 at drinks. Fielding had been fantastic all round. We let them off the hook a bit after drinks but they also batted extremely well knocking the ball around the gaps and keeping the bowlers from settling into line and length. A few wickets fell but we couldn’t get their main man out who went on to make a very impressive 75. A lot to learn for us about pacing an innings and looking for all the runs on offer not just boundaries

A good all round bowling display with Grades with 2, Greeny 2 and Stiffler with 1, and then kicked out of the attack for two full tosses – neither of which was of danger to anyone – a stupid rule they insisted on enforcing – which backfired on them later when their opener was also out of the attack. A stupid rule that needs a rethink from the league – put in place with good intentions but ordinary unforeseen outcomes.  Brentons also chipped in with yet another spectacular effort in the field with an unbelievable dive, roll and direct hit run out from gully.

Our turn to bat.  Chasing 184 in the rain, which were about 30 more than they should have had. Will and Speedy led from the front with positive and smart batting to push the ball around and punish the bad ones for us to be 0/52 off 13 and firmly in control. The loss of Will and then Special K put the brakes on a bit and we struggled to get going against a solid if not threatening attacking that bowled a disciplined line outside off which we didn’t quite adapt to and we fell 20 runs short. Speedy with another impressive 37.

No poor efforts with the bat but we could have been a bit more positive in getting them off their line and lengths. Some good cameos from Gaz and Blacky and everyone actually batted quite well. Just needed a little bit more urgency in a day where it was hard to get under the ball.  All in all many things were done right and there really were very few negatives. A 5% improvement in run rate and a touch tighter with the ball and it was a game to win by 50 runs. It was good to see that small improvements are all that’s needed to walk away from the next match up with this team with a win and win easily.  A game that got away but many positives to take away.

After a beautiful morning, it was hoped for a great day of cricket… then the clouds came in, the humidity with it, win the toss and bowl?  Yes.  In a crucial game for finals, we sent Richmond Union in, knowing they had a good batting line up, but praying that the rain came later in the day, turning the ball to soap.  Unfortunately, we had drizzle throughout their innings.  Opening with CK and Wolfy, the boys bowled well, but their batsmen pounced on anything loose.  After going off twice for rain, Knotty made a change after both delays, firstly Dicko with his leggies, bowling 8 straight!  Moreover, the Ferret from the other end also bowling 8 straight.  Both did a great job keeping it tight, slowing the run rate up.  The Ferret taking our first wicket, caught behind by Govey.  Dicko bowled too well, the batsmen refused to use their feet and couldn’t find an edge either.  Next change brought on Martie and Chinny who were both successful taking a wicket each.  Finishing off, CK and Wolfy again bowled well, with the batsmen now swinging and CK managed to bowl a maiden over – probably not his first time either! J  We had a few dropped catches and easy misfields, on a day where the ball was slippery etc., but it is no excuse, get to practise and work on these things.  It also helps when you play regularly, as consistency comes into play.  Anyway…

We were confident in chasing the 172 for victory.  We opened with the Lithgow’s, however they were both found LBW.  They did try to steal a single as the ball was being passed around the field back to the bowler, one of the strangest things I have ever seen!  Knotty and Govey came together and put on a decent partnership, keeping the score ticking along, before Govey retired for his second 50 for the season.  Knotty and Chinny batted for a little while, but unfortunately, Knotty forgot to tell Chinny to back up and look for the quick singles after a few tight overs, and Knotty was run out, oh dear.  From that point it got tougher and tougher but we remained a chance, right up to the last ballish.  In the end, we fell 14 runs short.  In a game full of controversy and passion, we fought it out to the end and thought that that was it for the season.  Therefore, we will come out stronger next week and finish the season with a huge win that maybe, just maybe see us play finals.

Make sure you get to practice and pay your subs if you want to be a chance to play finals!

On Saturday night, Woody organised a function of a group of friends from various parts of his life, such as Scotch College and Dees supporters.  The attendees included some former North Balwyn Uniting players.  It was a great event and it was great to hear the stories from some of the club’s greats from back in the 70’s, 80’s and 90’s.  Players that we have heard stories about, it was great to put a face to the name.  Names such as David Wood, Dale Rogers, Tony Miles, Rod Campbell, Peter Lithgow, Jim Forsyth, Rob Daniels and Peter Gregory shared stories with us on the days when men were men, playing on mats, not wearing helmets and scared the bejesus out of batsmen.  Thanks Woody for a great night. 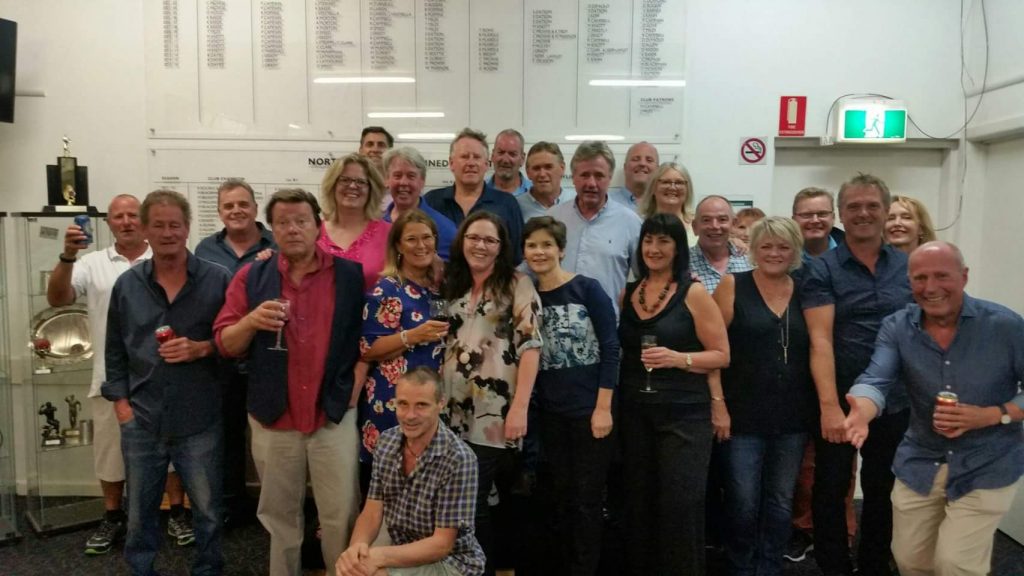