Date: 11th of October 2003
Number One Song: Where is the Love – Black Eyed Peas ft. Justin Timberlake
Number One Movie: Pirates of the Caribbean: The Curse of the Black Pearl 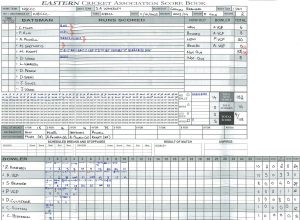 The Panthers have had some great batting performances over the years, some which are impossible to believe – such as Cheesey’s record ECA partnership in 2014/15, Baby Hewins winning a game off his ass and Speedy’s ton.

However I challenge you to find a more impressive knock then Matthew “if you don’t hit it hard enough you don’t deserve 2” Knott’s debut for the club.

Reeling at 3/15 Knotty, in a slightly inebriated state, hit 50 on debut. This itself is not unusual, however the manner he did this is – he did not hit a boundary in his 50 and even ran a 3 (with Woody!).

We are training tonight at the new rooms at Cherry Rd – get down there from 5pm!